Canada has become the land of second chances.  As of July 1, 2015, Statistics Canada reported that there are more baby boomers living here than children aged 14 or under.  By the latest estimates we will account for 20 per cent of the population by 2024.

With the explosion of this demographic, both CARP (the Canadian Association of Retired Persons) and the Canadian Medical Association are lobbying hard for a government-driven seniors’ strategy.  So far all of the political parties have courted  older adults’ support –– most of us vote—but an overall seniors’ strategy hasn’t emerged during this election.

Last week the Institute for Research on Public Policy released an enlightened report called “Designing a Seniors Strategy for Canada.” The intention is that this document will move the newly-elected government to hunker down and seriously address our basic needs such as improved health care, innovative housing solutions and a reasonable guaranteed annual income to support the most vulnerable.

This being said, the current lack of a political strategy doesn’t preclude the opportunity to make good on long-cherished hopes and dreams. For all intents and purposes most of us have abandoned the concept of Freedom 55 for something much more attainable: taking a shot at a second chance where it matters most.

If you are financially stable and have the inclination, here’s some things you can do to give yourself a second chance when it comes to love, marriage, friends, and grown children:

1. For boomers in long-standing marriages, retirement can the best of times:   a second chance to rekindle the love, intimacy and fascination that originally brought you together. Having weathered the perfect storm of career building, child-rearing and paying down the mortgage while paying up the RRSP, this is the time to fully enjoy that one remarkable person who’s been with you through thick and thin.

2. Now more than ever, you have the choice to live wherever you want and however large or small you desire. Retirement can be the time to pick up stakes and move to the quaint village where you’ve vacationed for years, or to fly south for the winter.  Some may wish to be close to the action of the big city. Or it might be the time to re-decorate your family home and turn it into an environment that suits your new retired status.  Create a home study in the spare bedroom, a man cave in the kids’ playroom or a woman’s backyard oasis where the potting shed once stood.   Your home is probably your biggest asset, so now is the time to unlock its inherent value.

3. For many new retirees, it’s the moment to re-connect with long-lost friends or relatives. Those folks you always intended to see but never found the time when you were working or raising a family or both.  Being sixty-five and over is a second chance to decide who you really want to spend your hard-won free time with.  Ask yourself:  are the people in your life those who light up your days, help give you the purpose and the desire to explore new things and to continue growing as a person?

4. Boomer time is also family time.  It gives you a second chance to re-shape your relationship with your grown children. Raising children is getting harder as family life becomes more complex. Holding a family together is outrageously challenging. Now you have the opportunity to set things straight with your kids, re-establish the ties that have worn thin or have disappeared altogether.

All this sounds admirable and can be accomplished, but it’s much easier to attain if you are a senior with a relatively secure financial base.  At the same time as the elder population is booming, one quarter of seniors are spending more than 30 per cent of their income on housing.  Returns on investments aren’t coming around any time soon so adjusting to lower global economic growth can play havoc with the budget.  Except for the equity in our homes, investment portfolios have been plummeting. Returns are as disappointing as they were in the dismal summer of 2011.

With the lack of a comprehensive political seniors’ strategy, or a rebounding equity or bond market, it’s left to each of us to chart our own course.  As of now, it’s up to us to find the best way to afford the things that matter most and to give ourselves the opportunity to enjoy a second chance with the important people or activities that have been simmering on the back for much too long.

Remember, the entire concept of a second chance is only 150 years old. Before mid-nineteenth century the population didn’t live long enough to consider a second chance probable. The notion came into vogue during the Victorian era. Novelists of the period specialized in narratives that gave their readers hope that personal situations could change for the better.  The thought that fate ruled your existence was fading fast.

Charles Dickens was best at showcasing hope to the hopeless while exposing the evils of the industrial age. In A Christmas Carol, Ebenezer Scrooge is scared silly into changing his mean, miserly ways. If nasty old Scrooge can change so can anybody is the subtext to Dickens’ tale. 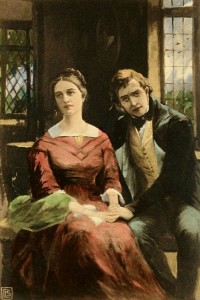 In Middlemarch, the greatest Victorian novel of all, George Eliot (a woman) winds her narrative around Dorothea Brooke. Eliot’s heroine is kind, intelligent, generous and loyal. But she makes a huge mistake early on.  She marries a dry old stick, the Reverend Casaubon, who undervalues her intelligence and devotion.  After the Reverend’s death Dorothea is determined to make a loving, mutually satisfying match.  She succeeds. Her second chance at love and a meaningful life is a spectacular comeback and a reminder that it’s never to late.

Even now, in 2015, second chances are there for the taking.

How to Make Good Decisions for Your Retirement