Author of ‘The Cook’s Temptation’,
Joyce Wayne, has won numerous awards for her contribution in Journalism and Fiction. Also known for her Retirement Matters blog for HomeEquity Bank, Joyce breaks down each chapter of Home Run with her insights.

Home Run: The Reverse Mortgage Advantage; a life-changing page-turner to help you retire on your terms. Learn more about our new book.

FIND OUT MORE ABOUT HOME RUN

The first thing for a new retiree to know is that there is power in numbers and you are not alone. According to Statistics Canada, by July 2020 more than 6.8 million adults in Canada were over the age of 65. By 2021, one in five people will be 65 or older, and one in three will be over the age of 55.

We boomers comprise a huge part of the senior population. In addition, by July 2019, Canadians over 65 accounted for 17.5 percent of the overall population, whereas children aged 0 to 14 comprised only 16 percent. This is a reversal of past demographic norms. In 2020, even boomers born at the late end of the group, in 1965, were turning 55. By 2031, all boomers will have turned 65.

Boomers stand out for a myriad of reasons other than sheer numbers. Those of us who are of the fairer sex became the women who entered the workforce and stayed put. By the 1980s, women were taking up noteworthy positions in corporate Canada and working as doctors, accountants and lawyers as well as teachers and social workers.

Our contribution to the economy has been enormous, and with that, we changed the social and familial conditions of the late 20th century and into the 21st century. We held down jobs when maternity leave was only 15 weeks long. With much pressure from working women, maternity leave grew to six months and then one year. Now it’s possible to take 18 months. We worked hard while devoting our evenings and weekends to raising our children. No easy feat—and I can say that as a single mother who worked full-time, except for a six-month maternity leave.

As we age, boomers have remained attuned to economic and social conditions in Canada. We vote in large numbers, we volunteer, we donate to charities and good causes while staying active and alert. Today there are many exercise programs as well as courses at colleges and universities specifically designed for older Canadians. We are definitely not the silent generation watching life pass us by.

When Executive Vice President of Marketing & Sales Yvonne Ziomecki first came to work at HomeEquity Bank, she realized instantly that our generation deserved more attention, and she set out to improve the availability of the reverse mortgage by alerting more Canadians to its usefulness. If you’re over 55 and no longer working, approaching a big bank for a mortgage can be daunting, but it doesn’t have to be this way. HomeEquity Bank has created a range of reverse mortgage products for our generation depending on our needs and our specific financial situations.

As the pandemic continues to alter our lives, one thing homeowners can take comfort in is that the equity in our homes has not diminished—in fact, it’s grown substantially. Home has become our sanctuary, our safe place and a haven from the storm caused by COVID-19. Sadly though, some older Canadians were not so fortunate.

In Home Run, Ziomecki & Ranson write “As it turned out, studies by the Canadian Institute for Health Information released in May 2020 showed that long-term care residents made up 81 percent of all reported COVID-19 deaths in Canada compared to an average of 42 percent in other OECD countries studied. The other countries ranged from less than 10 percent in Slovenia and Hungary to 66 percent in Spain.” And the numbers keep growing. By January 2021, the debacle in some long-term care facilities became so acute that either the Canadian military or the Red Cross were called in to take over the management of these residences.

As Ziomecki & Ranson also write, “Thankfully, our customers had already decided years ago that they valued the security and familiarity of the homes where they’d spent so many years. That’s part of the reason they became customers, to keep their homes. As we all waited out the pandemic in our homes in those early days, our clients felt that security even more. It reaffirmed their decision to ‘age in place,’ even though they also expressed their support for future reforms to the long-term care system.”

If you’re wondering what the profile is of the average HomeEquity Bank customer, it’s almost impossible to describe other than they are 55-plus homeowners. After that, the reverse mortgage customers are remarkably diverse. “So, when we look to paint a portrait of the new retiree, we’re well aware that the demographic does not have a single face,” Ziomecki says. She adds, “As a cohort, they do share some new realities of aging. But when we think of the people we’ve spoken to over the years, they seem more active, more technologically savvy and more community-engaged than the stereotype of the older adult that’s become all too common.”

One attribute we all hold in common is our desire to enjoy a healthy and secure retirement. By reading Home Run: The Reverse Mortgage Advantage, you can discover just how attainable that is.

In 2 minutes find out how you can qualify for tax-free cash with the CHIP Reverse Mortgage® and get your FREE guide today!

Progress Bar
20 % Complete
Your information is protected, and we will only use it to contact and serve you. It will not be shared with third parties.
Previous Post

Chapter Four: The Joy of Aging in Place

If you’re like many other 55+ Canadians, much of what you own fits into two categories – the equity in your home …

Get Your Free Guide
x
x 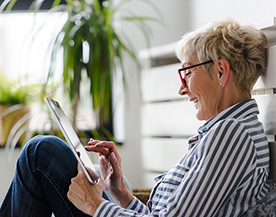 x
Thank You!
Your details have been successfully submitted.
Check your inbox for future updates.
x

We are sorry, the CHIP Reverse Mortgage is only available to Canadians 55+. We invite you to compare quotes on products with our partner, RATESDOTCA, where your age qualifies.

We are now Transferring you to Rates.ca to complete your Quote.
If you are not redirected in 30 seconds, please click here to continue.
The website you are being redirected to, its contents, products, information and links contained therein are not owned or controlled by HomeEquity Bank or any of its subsidiaries. Therefore, we are not liable for any damages relating to your use of the third party website or any of its products and services.